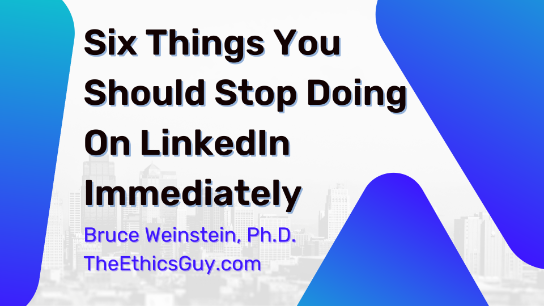 Six Things You Should Stop Doing On LinkedIn Immediately

Like you, I strive to use LinkedIn effectively. Unlike you, I know a LinkedIn expert who has shown me how to do this. Now she'll show you. Beth Granger helps people find more prospects and build their professional brands using social media, social sales and LinkedIn.

Here are six things that Granger suggests you stop doing if you want to use LinkedIn more successfully.

1. Stop Listing Your Former Employer As Your Current One

Bruce Weinstein: I've seen people who have been unemployed for six months list their former employer as their current one.

Beth Granger: Not a good idea. Employers can fill out a Notice of Inaccurate Profile Information.

Since so many employers won’t consider someone who isn’t working, people often don’t want to be blatant about being in transition. Some put that they're freelancing or consulting.

Weinstein: Would it make sense, then, to do regular consulting work while you're unemployed so that you can legitimately say that you’re serving as a consultant?

Granger: Yes, absolutely, or you can volunteer. That type of work could lead to an actual job.

Weinstein: But absolutely do not claim you still work for a company when you don’t.

2. Stop Expecting People To Endorse You Just Because You Endorsed Them

Weinstein: Last year, a connection I don’t know well endorsed me for all of the skills I have listed. I didn’t ask her to do this. After she made the endorsements, she asked me to do the same for her. Your reaction?

Granger: I would tell that person you aren’t comfortable endorsing her for things you aren’t personally aware of her being skilled at. Plus, you can remove or turn off any endorsement she gave you if you like. Just click on the number next to the skill and there is a toggle for each one.

It is also an opportunity to set up a conversation so you can get to know each other better.

Weinstein: Don’t you think it’s better to give for its own sake, rather than giving to get?

Granger: 100%. I like to use endorsements as a thank you. If someone makes a referral for me, I will, in addition to saying thank you, endorse them for something I know they are skilled at.

3. Don't Use The Same Profile Photograph For Years

Weinstein: This is one I struggle with. I guess I don't want to admit that my looks are changing as I get older. I'd like to think that I look just like the headshot I have from five years ago.

Granger: If someone wouldn’t recognize you, it’s time for a change.

Weinstein: How should I determine this?

Granger: You could ask some friends or colleagues, but if you're honest with yourself, you know. You want to be recognizable if you meet a person who knows you only from your LinkedIn page.

Weinstein: For men, an issue is losing our hair. Many of us don’t like this fact, so we’d like to use the photo from five years ago when we had more hair. But I think what we don’t consider is that hanging on to a photo from years ago is a form of deception.

Granger: I never thought of it that way, but yes.

Weinstein: Perhaps a good rule, then, is to update your photo at least every other year.

Granger: I don’t think it needs to be that often, but at least every five. I do it when I get new glasses (laughs).

4. Stop Collecting Recommendations Without Giving Them

Weinstein: When I see that someone has given more recommendations than they’ve received, I immediately respect that person. He or she is a giver.

Conversely, if I see that someone has received a lot of recommendations but hasn’t given many, I wonder how other-regarding that person is. Am I being fair, or is that harsh?

Granger: If they haven’t given any and have received a lot, that may be selfish. Some people wait to be asked, or they don’t know how to do it.

Weinstein: How do you ask for a recommendation? Just use the LinkedIn form?

Granger: I ask in person or on the phone first and if the person says yes, then I send the form.

Weinstein: What about asking via email?

Granger: That could work. The best time to ask is right after someone thanks you for something you’ve done.

5. Stop Tagging People And Companies In Posts Unless Your Post Is Directly Relevant To Them

Weinstein: Recently I got a message from an organization I’d tagged in a post. A representative wanted to know how my post was relevant to his organization. I explained that it was relevant in a general way, but this made me wonder if I should tag a person or company only if my post is directly relevant to them.

Granger: Oh, good one. It’s tricky. Tagging someone is essentially a request for them to respond in some way, or notify them because you think they would be interested. If overdone, it can be annoying. It's not good to tag the same people on every single post, for instance.

Weinstein: It’s better to err on the side of restraint.

Granger: I like to use it to publicly thank someone. I also have used it as a request to share or comment. For example, we're both in the National Speakers Association's New York City Chapter. As the Director of Communications and Marketing, I'll write a post about an NSA event and mention a lot of our members so they'll share it with their networks.

Weinstein: All of the issues we’ve discussed reveal the limitations of social media. Every one of the problems we’ve examined could be solved by in-person interactions. Text simply leaves too much open to interpretation.

Granger: I like to combine the phone, Zoom, Skype, and in-person communication with social media. People can still misinterpret things in person.

Weinstein: That’s a good point. No one method of communication is problem free. But face-to-face is still, overall, the best, in my view.

6. Stop Inviting People To Join Your LinkedIn Network Without Sending A Customized Note

Weinstein: It means a lot more to me when I get an invitation that includes a note about why the person wants to connect.

Granger: You should customize your LinkedIn connection invitations. People meet so many other people that this helps remind someone who you are and where you met. If you're trying to connect with someone you don’t know but would like to know, explain why you want to know them.

Of course, you don't have to do this with a relative or someone you know really well. Also, if you use the new “nearby” function, you connect while you're with that person, and you can’t customize that. This is great for trade shows or events.

There's an exception to every rule.

This blog post originally appeared in my Forbes column on ethical leadership.

Thank you for reading my blog!  I hope you're having a good day. Or at least not an awful one.

Use the coupon code ETHICSROCKS to get 30% OFF on all of my ethics courses, such as:

“How Practising Gratitude Enriches Your CPA Practice--and You”

If you want to enrich your business through the practice of gratitude, why not enroll now?

The code will work on all of my other ethics courses, which you may see here (scroll down past my bio).

We'll keep you in the loop with everything good going on in the modern professional development world.

By submitting this newsletter request, I consent to LearnFormula sending me marketing communication via email. I may opt out at any time. View LearnFormula's privacy policy