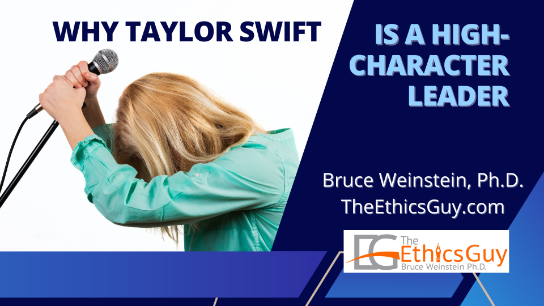 Why Taylor Swift Is A High-Character Leader

Taylor Swift is "the most powerful voice in pop music today,”  Philip Elmer-DeWitt wrote in Fortune about her letter to Apple.  That missive revealed that Swift is also a persuasive leader whom C-Suite executives, other managers, and employees would do well to emulate.

Swift called for Apple to abandon its decision not to pay artists royalties during the 3-month trial run of its forthcoming streaming music service, Apple Music.   For Swift, this policy was “shocking, disappointing, and completely unlike this historically progressive company.”  She pulled her album, “1989,” from the service, and wrote movingly about why Apple owes it to musicians and songwriters to compensate them for their labor.

After Swift posted her appeal on her Tumblr page, Apple reversed its policy on compensation, the New York Times reported.  Eddy Cue, Apple’s senior vice president of Internet software and services, told the Times, “When I woke up this morning and read Taylor’s note, it really solidified that we need to make a change.”  And they did.

Taylor demonstrated three qualities of high-character people that have potent implications for CPAs, HR professionals, engineers, and other leaders in business and beyond.

1. Courage: Swift stood up to the most successful company in the world by denying Apple Music the right to stream her latest work.  Apple told Rolling Stone that it will not punish artists who take exception to their policies, but Swift’s publication of her letter was still a courageous act.  Who knows how Apple might have responded to her?  How much money might Swift have lost as a result?

By taking a stand for what was right, Taylor Swift she gained a huge PR coup for her brand and provided a courageous example for others to follow.

Smart leaders do not merely tolerate courageous acts; they encourage them.  As Alexandra Troy, founder and CEO of Culinary Architect Catering, explains in my book The Good Ones, a brave employee I’ll call Sarah revealed that another employee, Mabel, was bad-mouthing Alexandra behind her back and not paying attention to details at work. “Apparently this had been going on for quite a while, and others knew about Mabel’s behavior, but no one was willing to tell me about it until Sarah did.”

Alexandra asked Mabel if these accusations were true. Mabel said they were.  She got an A for honesty and an F for remaining gainfully employed by Culinary Architect.

The company’s clients include Volvo, Estée Lauder, Citibank/Citicorp, Brooks Brothers, Lord & Taylor, Macy’s, Merrill Lynch, and Tiffany.  Imagine the damage both to Alexandra’s reputation as CEO and her ability to attract and retain other tony clients if Mabel’s dishonorable conduct had gone unchecked.  That’s why Alexandra Troy, like Eddy Cue, was right to welcome a contractor’s courageous actions.  Doing so, in fact, evinces their own courage and helps to explain why both businesses are thriving.

2. Fairness: Swift called for the most successful company in the world to treat artists fairly. "We don't ask you for free iPhones," she wrote.  "Please don't ask us to provide you with our music for no compensation."

To be fair is to give to others their due, and there are several ways in which a leader’s commitment to fairness is tested.  Does he or she ensure that prospective and current employees are not being discriminated against?  Does the company have procedures in place for resolving disputes between employees? And, per Taylor Swift, is the company paying people fairly?

Stewart Brand, creator of the now-defunct Whole Earth Catalog (best described as a hippie version of a Hammacher Schlemmer or Sharper Image publication), appears to have the dubious distinction of first uttering the statement, “Information wants to be free.” In 1984, he told Steve Wozniak:

Brand could not have known the implications of this idea in the age of the Internet. It takes four seconds to find the complete album of Elton John’s Goodbye Yellow Brick Road on YouTube, but listening to it that way pays John and his musician a total of zero dollars. You’re getting something (a lot, actually), for nothing.  There’s an old-fashioned word for this: stealing.

Honorable leaders recognize that it is unfair to expect employees to give them something for nothing or for less than what their labor is worth. It’s one thing to ask your chief compliance officer to respond to take overseas calls at night from time to time; it’s quite another to assume that he or she will be at your beck and call every weekday evening and all weekend.

Information doesn’t want to be free.  It has no wants or desires.  But employees and contractors do, and the most basic one is to be treated fairly.  Savvy leaders like Apple’s Eddy Cue are willing to correct errors in judgment when contractors like Taylor Swift draw attention to unfair corporate policies.

C) Humility: Swift could have spoken only on her own behalf, but she chose to use her global platform to promote the interests of all artists:

This is not about me. Thankfully I am on my fifth album and can support myself, my band, crew, and entire management team by playing live shows. This is about the new artist or band that has just released their first single and will not be paid for its success. This is about the young songwriter who just got his or her first cut and thought that the royalties from that would get them out of debt. This is about the producer who works tirelessly to innovate and create, just like the innovators and creators at Apple are pioneering in their field…but will not get paid for a quarter of a year’s worth of plays on his or her songs.

Taylor Swift demonstrated how it’s possible to be both wildly popular and humble, the type of feat that, as Fortune senior editor Jennifer Rheingold noted, is associated with many successful CEOs.

Humility gets a bad rap, mostly because it’s misunderstood. The Oxford Dictionaries defines humility as “a modest or low view of one’s own importance.”  But this is mistaken.  Humble people have an accurate, not a low, view of themselves, and this means recognizing that their successes owe as much to the contributions of other people as it does to their own efforts.

Adam Lashinsky wrote in Fortune that Netflix CEO Reed Hastings has prevailed where others have failed because of his willingness to admit to being arrogant in the wake of bumping up subscription fees in the middle of a recession.  “[H]e learned valuable lessons about being in better touch with his customer,” Lashinsky noted, “a factor in business as important as having a strategic vision.”

Taylor Swift’s actions revealed her to be a powerful leader, not just a popular singer. CPAs, HR professionals, engineers, and others who want to succeed where others struggle should think about how they too can use courage, fairness, and humility to advance the missions of their organizations.

Thank you for reading my blog!  I hope you're having a good day. Or at least not an awful one.

As The Ethics Guy®, my virtual and in-person keynotes and video training programs help companies promote ethical behavior at every level of the organization. The result is an engaged and satisfied workforce, better clients, and a strategy for long-term financial success. I received a B.A. in philosophy from Swarthmore College, a Ph.D. in philosophy and bioethics from Georgetown University / the Kennedy Institute of Ethics. My books include "Ethical Intelligence," "The Good Ones: Ten Crucial Qualities of High-Character Employees," and for tweens and teens, "Is It Still Cheating If I Don't Get Caught?" Contact me to check my availability to speak to your group here.

Ethics Credits for You

Here are links to my ethics courses on CPD Formula and LearnFormula, all of which will earn you one or two ethics credits. Just scroll down past my bio and you'll see them all.

We'll keep you in the loop with everything good going on in the modern professional development world.

By submitting this newsletter request, I consent to LearnFormula sending me marketing communication via email. I may opt out at any time. View LearnFormula's privacy policy