A review of the code of professional conduct and a round table of ethical situations practitioners face.

check_circle
No preparation required
lock
1 year access
US$70
verified 100% moneyback guarantee
If you cancel within 10 days and you’re not completely satisfied, we’ll give you all your money back. No questions asked.

Get your team access to 3,024 top CPDFormula courses anytime, anywhere. 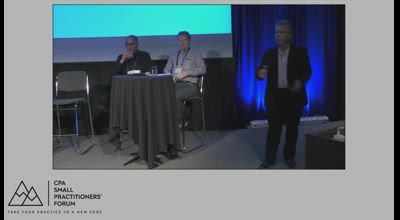 The CPA Small Practitioners’ Forum was created to offer an inviting, semi-causal, and easygoing professional development weekend that provides substantial professional development value to small practitioners. All profit earned by the CPA Small Practitioners’ Forum is donated to the Alberta CPA Education Foundation, so you are helping young people in Canada get scholarships for university. All these courses are reviewed by the delegates at the Forum in Banff annually so we have a great lineup that is adjusted every year to keep things relevant to small practitioners. If you work at a public accounting firm in Canada with employees of 1-50 people, you are our target demographic and you should find this course useful.

Prior to joining CPA Alberta, Randy was an Instructor at Red Deer Polytechnic where he taught various accounting courses in the Diploma and Degree programs. During his time there he played a leadership role in establishing senior accounting courses that met prerequisite requirements for CPA PREP, thereby enabling prospective Central Alberta CPA’s to remain in the region for their post-secondary education. Randy began his professional career in Winnipeg with Arthur Andersen & Co, where he obtained his Chartered Accountant designation and was a member of the firm’s audit, assurance and business advisory services practice. Subsequent to achieving his designation Randy moved into industry positions, eventually moving into CFO roles with both private and publicly listed companies. He has extensive leadership experience with retail, distribution and oilfield services companies.

Larry Brownoff is the Director, Member Relations with CPA Alberta. He has an extensive network of accounting professionals and over a decade of experience recruiting for companies across multiple industry sectors where strong financial leadership has enabled growth. Larry has held various leadership roles within Robert Half International where he specialized in senior finance and accounting recruitment, placement of senior project financial professionals and executive search. In addition to his decade of recruiting expertise, Larry brings 17 years of senior level industry experience to his recruitment assignments enabling him to effectively assist clients in creating high performance strategic leadership teams.