They will discuss the meaning of auditing across different countries, the principles of Trust Service Criteria, COSO and the Sarbanes- Oxley frameworks, and more!

We make it easy for you to stay compliant with your organization's requirements by providing completion certificates that you can download anytime.
monitor

You're busy - we get that. That's why we've recruited the top experts in your field to provide courses that you can take on your own schedule.
smart_display

Learn at your leisure. You can start, pause, and restart the courses whenever you like. They are mobile optimized for extra convenience.
Learn the Easy Way
Access the course for a full year
Start and finish on your own schedule
Download completion certificates
Share your certificate on LinkedIn 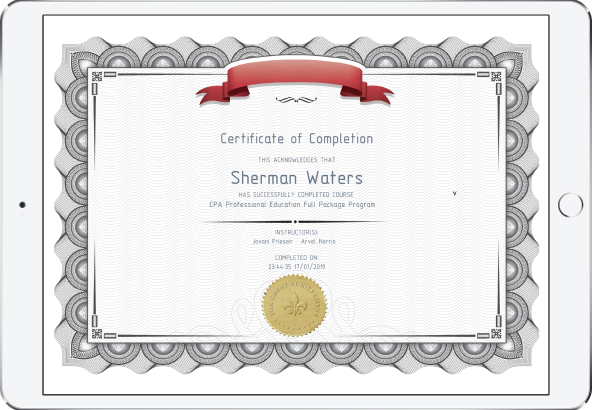 Did you enjoy the course preview?

You can start studying right now

Learn from the best

I have over a decade of multimedia experience as a desktop publisher, Livestream producer, PA announcer, webcast director, professor, emcee, and more. I am a radio broadcasting graduate with additional coursework in political science and journalism. I gained critical knowledge while shadowing veteran broadcasters. I have extensive training in creative writing, current affairs, ...

Tim is a certified FCPA, FCA, CIA CRMA, CFE, and the founder and managing director of Risk Oversight Solutions. His focus is on promoting the business case for, and helping organizations implement, strong management-driven STRATEGY/OBJECTIVE CENTRIC RISK AND CERTAINTY MANAGEMENT (#ORCM). He has received awards for outstanding contributions to the risk and assurance field from CPA Ontario, IIA, ACFE, and OCEG. His work in the field of strategy and risk governance has been recognized by articles published by Harvard and Columbia Universities, London School of Economics, the IIA, Conference Board, Ethical Boardroom, and many others. In December 2019 Richard Chambers IIA CEO named Tim to his list of the top 10 internal audit and risk thought leaders of the decade globally. He has provided training and advice to major corporations around the world including Mobil, Shell, Telstra, NAB, KPMG, RBC, CIBC, MBNA, Manulife, Canadian federal government, BellSouth, Sonera, Rabobank, ABN Amro, Novartis, TMX, City of Burlington, public sector organizations at all levels, SVG Capital, and scores of others. From 1991 to 2004 he was founder and CEO of CARDdecisions Inc. He launched CARDmap, the world's first integrated risk, and assurance software in 1997 and took it to the cloud, and offered its software as a service (SAS) in 2000. Tim sold CARDdecisions to a leading GRC software vendor, Paisley/Thomson Reuters, in 2004 where he served as Chief Methodology Officer for three years. Since that time he has focused on building his second generation of disruptive innovation to help organizations transition from traditional strategy, risk, and assurance methods to strong management-driven objective-centric risk and certainty management.